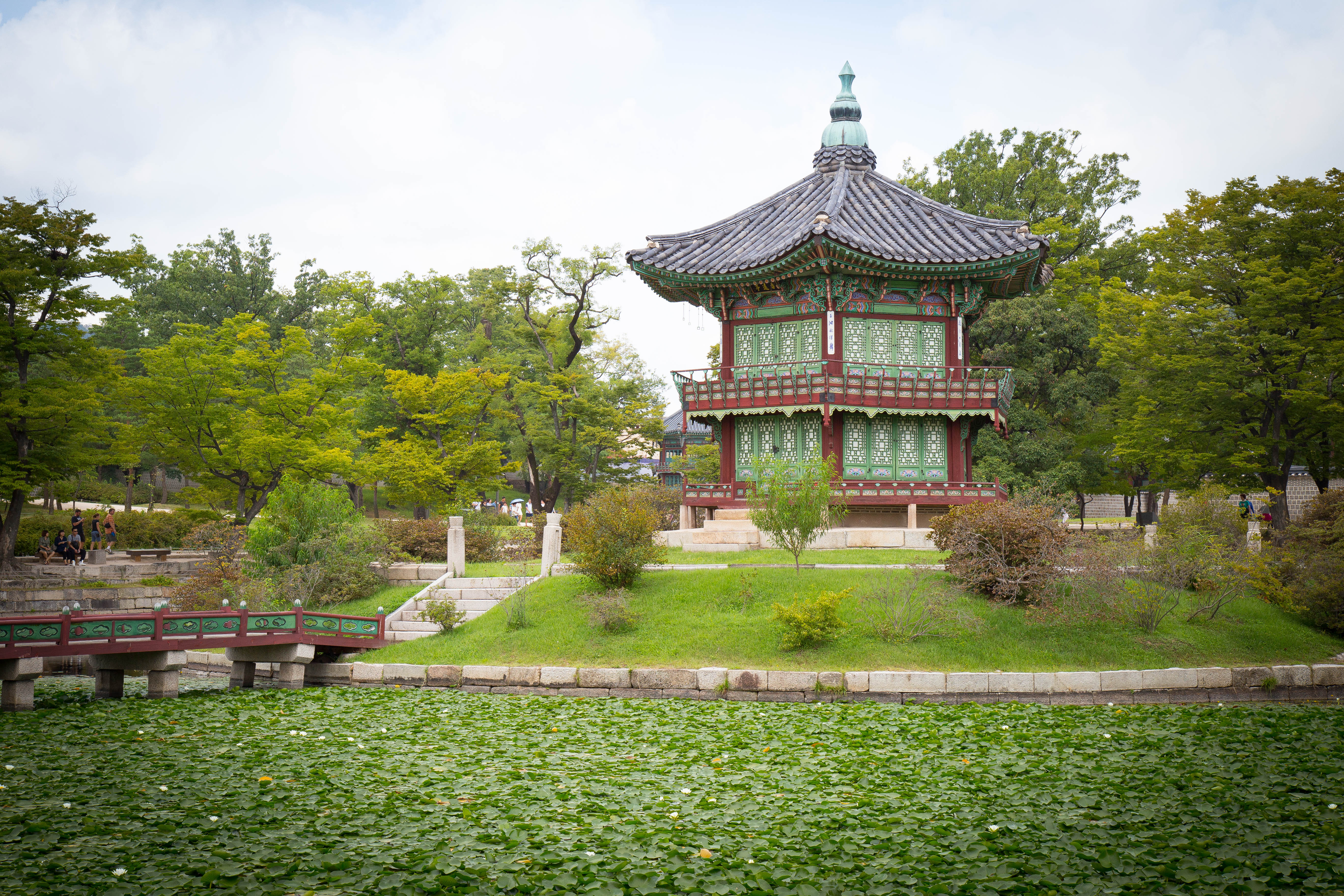 We got up early this morning with plans to meet up with Dr. Henry. He had planned a jam-packed day for us of things to see around Seoul and he wasn’t kidding when he told us we would be busy.

Before we met up with him, we had breakfast at the hotel. Breakfast is a mix of Korean and western breakfasts and we have quickly become obsessed with these mochi rolls that are flakey on the outside by soft and chewy on the inside. They have a hint of sweetness and are speckled with black sesame seeds. Yum.

After rendezvousing with Dr. Henry at the hotel, we took the metro just a few stops and popped out at  Gyeongbokgung Station, which unsurprisingly took us to Gyeonbokgung Palace.

I have to admit, I thought when we got off the metro we would have to walk a few blocks to the palace, but the entrance basically dropped us off in the courtyard. It’s quite the sight to see when you are emerging from the underground station.

Gyeongbokgung Palace was the main royal palace of the Joseon dynasty. It was built in the late 1300s and then destroyed by the Japanese twice and rebuilt twice. The latest restoration started in 1990 and is currently ongoing. The detail and painting is just stunning.

There are stone animal guards protecting the palace. This is a particularly ferocious white tiger.

Dr. Henry had planned our day around the scheduled English speaking tours, which meant we were on a tight schedule and we had to keep to it. During the tour we were specifically given time to photograph this building. It’s called Gyeonghoeru Pavilion and it’s a registered Korean national treasure. The building sits on 48 stone pillars. The inside ones are circular and the outside ones are rectangular to represent the idea of yin and yang.

The palace is enormous, consisting of several buildings sprawling through northern Seoul. It’s simply beautiful and as the restorations are on-going, I can only imagine what it will look like as more and more are completed.

After our tour of Gyeongbokgung Palace, we stopped for a little breather and some refreshing (if not poorly named) Pocari Sweat. It sort of tasted like diluted Gatorade.

We then headed over to the Jongmyo Shrine but got there early enough to stop and have some lunch. Trotting behind Dr. Henry (the dude walks SO fast), we ended up at what looked like a student cafeteria with a small lunch line buffet. We had rice, kimchi pancake, Korean acorn jelly, and fresh kimchi. It was really good, especially after our busy morning.

With our hunger satisfied for the moment walked over to Jongmyo Shrine in time for their afternoon English tour. The shrine was built for deceased kings and queens of the Joseon dynasty. It’s a UNESCO World Heritage site. The main shrine has 19 chambers and there is a secondary building with an additional 16 chambers. The kings are placed in the chambers based on their merits and accomplishments.

As you walk through the complex, you see a three level path. Paths like these can also be found at the palaces. At the palaces the center, highest level is for the king and the lower paths are for his servants and officers. At Jongmyo Shrine, the center path is reserved for the spirits of the deceased and cannot be walked on.

After the shrine we hoofed it over to Changdeokgung Palace to take a tour of the Secret Garden. Changdeokgung Palace was the second palace after Gyeonbokgung Palace and was built supposedly because it was supposed to be geographically beautiful, but really because there was some serious power struggle stuff going on at the other palace and the King wanted to escape all the bloody drama.

The Secret Garden stretches far beyond the rear of the palace and was used for relaxation by the royal family. The garden was designed around the natural landscape and all the buildings are beautifully incorporated into existing garden.

Did you know this is what rice looks like as it’s growing? I had no idea. There’s a little rice paddy in the garden that the king used to learn how to grow rice.

Twelve miles later we had seen the sites and closed down the palaces. We ended up heading to a nearby restaurant to grab some dinner. Dr. Henry’s son met up with us. Apparently I had met him when I was two back in Boston, but I had no recollection. He vaguely remembered me, but only as a two year-old with a wrist leash so I wouldn’t run away. We started our meal with some enormous mandu (dumplings).

Dr. Henry insisted we try some Makgeolli which is a rice liquor that is unfiltered. It’s a little sweet and a little tangy and is usually served in bowls.

We then shared an insanely delicious kimchi jjigae, which is a spicy Korean stew. I was so hungry though that I forgot to take a picture.

After dinner we walked around for a while and then shared some shaved ice. Andrew and I got one topped with adzuki beans and nut powder. Dr. Henry and his son got a green tea shaved ice. I was a big fan. It was refreshing without being too sweet and the perfect ending to a long day.