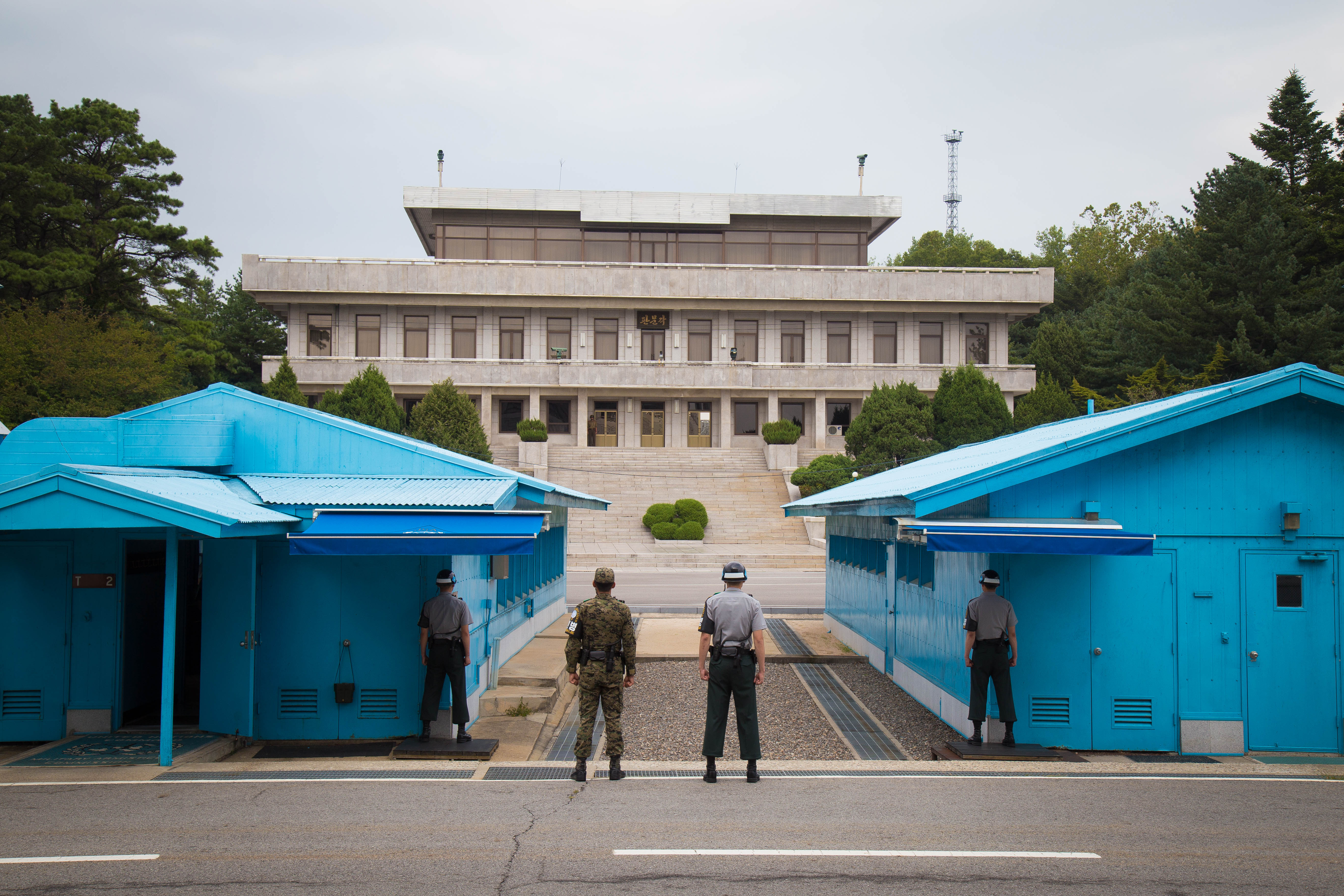 Our last day in Korea was mostly dedicated to a trip to the DMZ, the Demilitarized Zone. It was one of the few things Andrew really wanted to see and luckily political happenings worked out in such a way that we were able to get a tour in.

The trip was literally nauseating. The only way to the DMZ is with a tour group. We were recommended one that conveniently left from the hotel across the street from ours, so we got up early and walked over to catch the bus. The bus ride was brutal. It was a little too warm and a little too bumpy and I think everyone was feeling a little queasy by the time we reached our first stop.

The DMZ is a 4 km wide buffer zone between North and South Korea. When you approached the boundary of the DMZ the bus had to stop and Korean soldier got on to check everyone’s passports. There’s 2 km on the southern side of the boundary and 2 km on the northern side and as we drove though, we could see farmland and lots natural landscape. Because of security reasons though, we weren’t allowed to take pictures.

Our first stop was at the 3rd Tunnel. The 3rd Tunnel is the 3rd out of 4 tunnels that have been discovered by the South Koreans and built by the North Koreans to attack Seoul. The tunnels were discovered before they were completed though.

We weren’t allowed to take any pictures as we went into the 3rd tunnel though. We took a monorail down to the actual tunnel and we were allowed to walk through a small portion of it. In the tunnel you could see the places were dynamite was placed to built the tunnel. It was pointed out that the explosions were all pointed towards South Korea. Also, the tunnel walls are covered in coal dust. The North Koreans claimed the tunnels were really built for coal mining, despite the evidence that coal mining could not be happening there.

After the tunnel we headed to the Dora Observatory. There’s not much there, but it is an opportunity for visitors to look over the expanse of the DMZ and into North Korea. There are binoculars so you can see the propaganda village in North Korea, plus the factory town in North Korea, the Kaesong Industrial Village. It was a bit misty that day, so it was hard to get a good clear view into North Korea though.

From there we headed to Dorasan Station. Dorasan Station is the northern most train station in South Korea. It was built with the intention of running rail across the border into North Korea and beyond. The station is new, beautiful, and set up to run trains into North Korea, but because of the political climate, trains don’t run north. There are a few trains a day that run from Seoul, but once you get there, that’s the final destination.

Then, it was time for lunch! We went to a little restaurant that served bulgogi. Andrew and I had a table to ourselves and we were able to eat to our heart’s content. I also had my only Coke of the trip there.

After lunch we went to Imjingak Village. There you can see Bridge of Freedom where POWs and soldiers returning for the north walked across back into South Korea. There are hundreds of ribbons and messages tied to the fence that blocks off the bridge to North Korea.

There’s also a large bullet ridden, rusty train car that used to run into North Korea that is representative of the tragedy that occurred and continues to occur due to the war.

Our last stop of the tour was to the Joint Security Area (JSA). This is where things got legit. The first few stops felt a little disingenuous. They were a little too polished and a little too edited for tourists to completely feel the magnitude of the area that we were in. But once we pulled up to the JSA, it immediately felt different.

There’s a dress code you have to abide by to even enter the JSA. No shorts, sleeveless shirts, pants with holes, sandals, or basically anything that could be considered inappropriate. When we got to Camp Bonifas, we watched a briefing on the area and signed a safety waiver. We were allowed to bring cameras, but only allowed to take pictures at the specified locations and at certain times.

After the briefing we switched onto JSA buses that were driven by ROK (Republic of Korea) soldiers. It was just a short drive to the welcome center. When we got there, we had to walk in pairs and we were not allowed to point or make any gestures. They reminded us often that we were being constantly filmed. The led us to the steps of the welcome center facing the North Korean welcome center. Fun fact, both welcome centers were two stories high, but then North Korea decided they didn’t like that so they added a third story after the fact. We were only allowed to take pictures of North Korea. You were allowed to turn around and take a selfie, but you could not photograph the South Korean side. If you look in the picture below, you will see a concrete bar between the buildings that bisects the buildings. The ground looks different on either side of the bar. That’s the exact border between North and South Korea.

They let us go inside the conference room. We had a number of armed soldiers who stood at the ready the entire time we were there. They aren’t normally there, but only when there are visitors. If you look in the picture below, the people on the left side of the table are in South Korea. The people on the right side of the table are in North Korea. We were allowed to walk back and forth in the conference room, so technically, for a few minutes, we were in North Korea!

From there they drove us back to the entrance to Camp Bonifas. On the way, we drove by the Bridge of No Return. It’s called that because after the war, POWs were given the option to stay in the South or return to the North. Those that did, walked across that bridge back to North Korea. It’s no longer used.

We were also better able to see the propaganda towns and their giant flagpoles. The North Korean flagpole is the 4th largest flagpole and was built in response to the one built in the South Korean propaganda village (and naturally quite a bit taller). In order to live in the South Korean village you have to have been born into a family there or marry into one. There’s strict security, but financial and other benefits to living there.

It was an interesting tour and I’m glad we went, but not something I think I need to do again anytime soon. In talking with Dr. Henry, apparently very few South Koreans ever visit the DMZ and he was interested to know why we wanted to go. It’s sometime unique. There’s nowhere else in the world like it.

After an hour ride back to Seoul, we dropped our stuff off at the hotel and headed to Itaewon. Itaewon in an area with lots of little shops selling crafts, jewelry, and other little souvenirs. We figured it would be a good place to get gifts for people. Also, a good place to try watermelon popsicles.

Unfortunately we did not have a lot of time there before it was time to meet Dr. Henry for dinner. Since we had somehow managed to not have any Korean BBQ while we were in Korea, we tried to remedy that. Walking down the street we stumbled upon a place with pictures of meat being grilled and went in. The food was decent, but definitely not spectacular. It was still a nice way to end our trip though.

We had ended up in Dongdaemun. In Dongdaemun, they had recently finished converting an old baseball stadium into a giant walking design plaza. Apparently during the day there are exhibits to explore plus old and new Korean markets. It’s very futuristic looking.

After dinner we bid Dr. Henry farewell. While we were in Seoul, he was an impeccable and generous host and I was very glad for the opportunity to see him again. I’m hoping our paths cross again soon, whether it be in America or in Korea.

We took the metro back to our neighborhood, Myeongdong and decided to walk through the street vendors one last time. It’s funny how in our few short days there, we had become so familiar with the area. Andrew got one last snack to close out the evening. Why wouldn’t you want a giant Belgian waffle topped with ice cream?

When we got back to our hotel, we toasted to an amazing, wonderful, exhausting, enlightening trip. I couldn’t believe it was already time to go home.