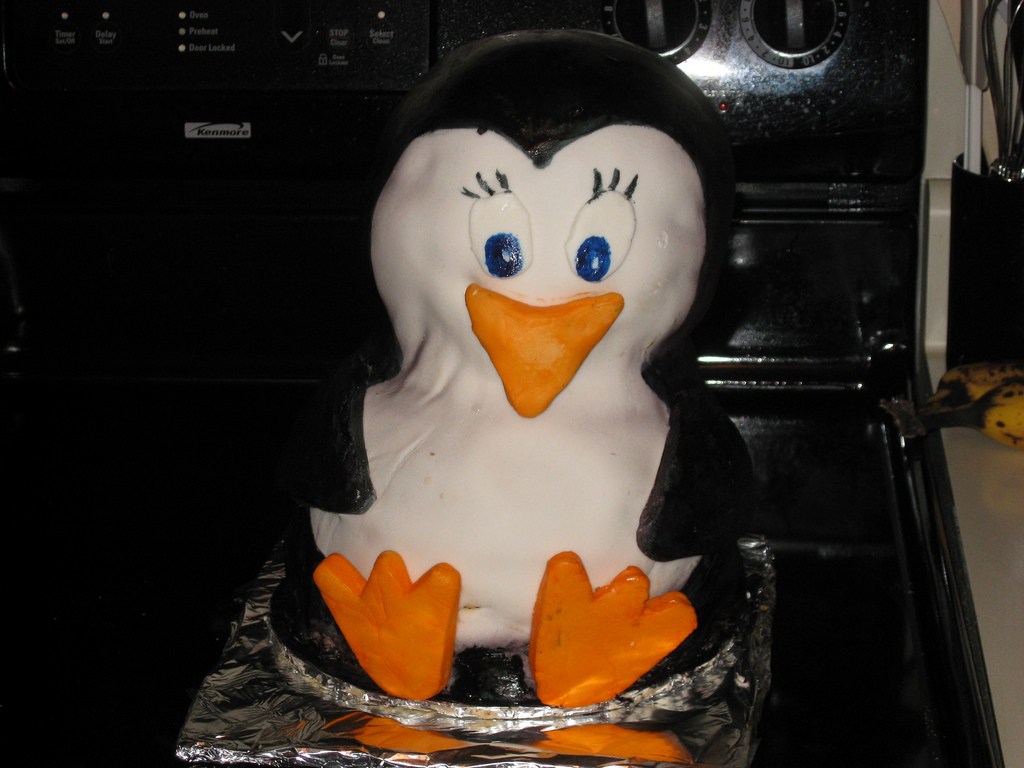 Do you have one of those friends who you can go months without seeing, but as soon as you see each other again, it’s like you no time has passed? I have a couple, and Shosh is one of them. Shosh and I met in college. We were on the gymnastics club together and bonded over knee injuries and our Jewishness.

Shosh is two years younger than me, and since I’ve left college she’s become an advocate for malaria awareness and prevention, started med school, and is generally poised to change the world. And I have no doubts that she’s going to do something extraordinary with her life.

Shosh also likes penguins. And peanut butter. Which was the inspiration for this cake.

I was headed back up to college to do some recruiting for work. Conveniently enough, I was headed up there on Shosh’s birthday. So I decided to make her a cake. The cake you see above in fact.  I spent a long time with this cake and over the course of our adventure together, I named him Penguin Pete.

Penguin Pete had the honor being the first cake I ever traveled with by plane. In order to ensure that he got to school safely, he traveled in a large plastic container. Now Penguin Pete doesn’t mess around. He’s like the dad penguin at the beginning of the incubation period (stuffed full of food and heavy). Seriously, lugging around a giant plastic container with a cake in it in one hand and pulling a suitcase with the other while running through an airport is not a pleasant experience. Also, you get a lot of looks because you are a crazy person running through an airport with 18 inch tall, three dimensional penguin cake.

Needless to say, Penguin Pete was a little worse for the wear when he finally arrived at Shosh’s house after two car rides, two plane rides, and one frantic run through the Philly airport. He had a mild contusion on his head where he was leaking peanut butter brains and he had suffered a double foot amputation. An emergency duel limb reattachment was successful performed, but we were unable to repair the head contusion before he met his ultimate demise.

This was one of the first 3D cakes I ever made, which explains his wrinkly texture. My fondant smoothing has gotten better (see the Turkey Cake) and I’ve learned how to color my fondant instead of just painting it.

The cake was tasty though. Chocolate cake with some deliciously fluffy peanut butter icing.

Adapted from All Recipes

Beat the butter and the peanut butter together until creamy. If you have a stand mixer, use it. If not, well, a hand mixer will work, but you might work up a sweat.

Slowly add the confectioners’ sugar until well incorporated, adding the milk as necessary for the desired creaminess.

Makes about 3 cups of icing.