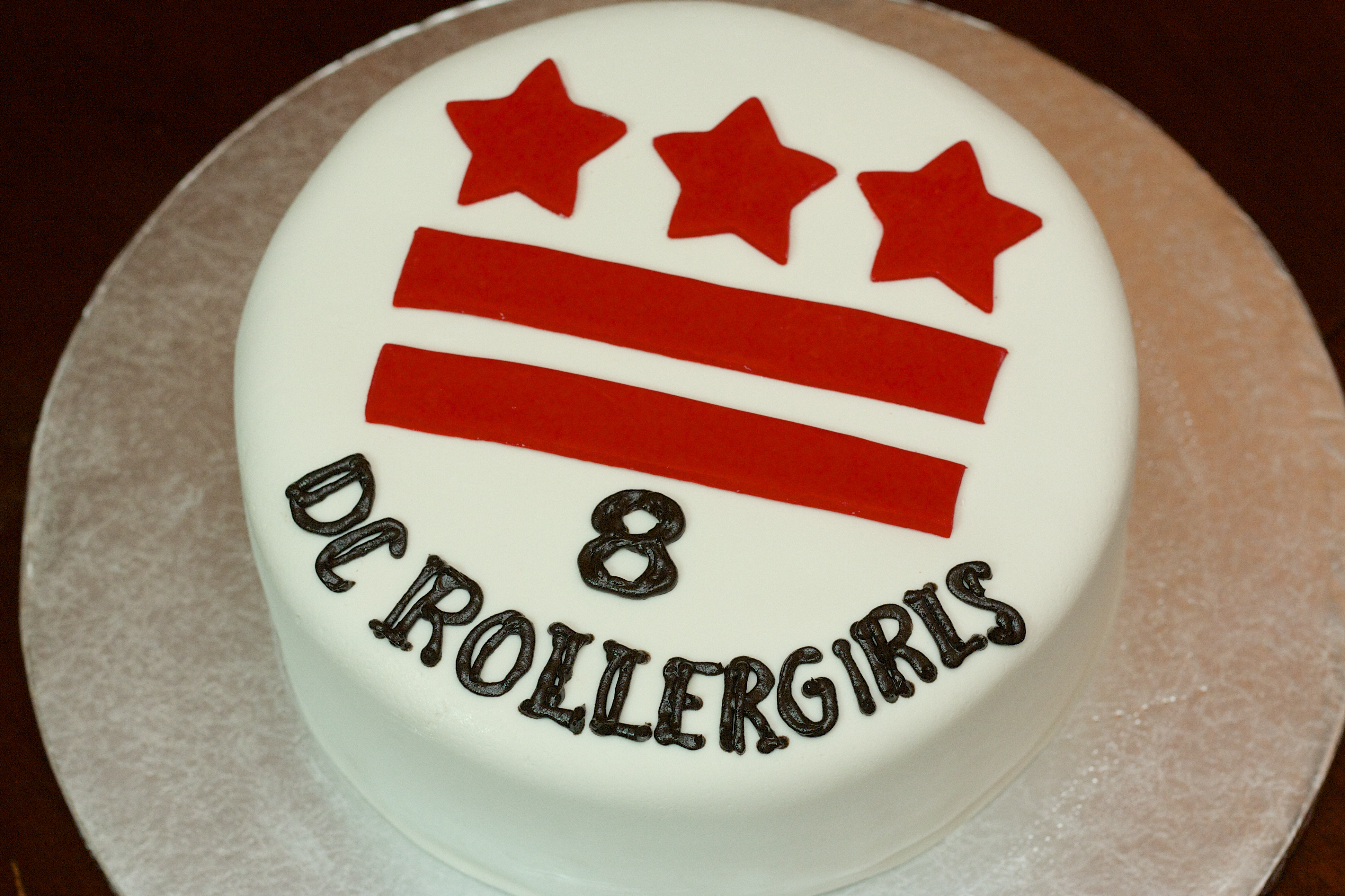 Today was a day chalk full of derby love. It started bright and early with some last minute preparations for the evening party, but before I knew it, it was time to head to the Sandy Spring Adventure Park. I’ve been there a few times before, once with Elise and once on Simmie Day. Both times I had been there before were a ton of fun and I’ve always left wanting to go back so when this was voted on for our end-of-the-year DC DemonCat party I was totally pumped.

It was so much fun. We climbed, we swung, we zip lined, we jumped. We were all a bunch of big sweaty messes by the end, but better off for it. It had also been a while since we’d all been together so it was so good to see everyone again.

After all the climbing we got together to have some food (so much food. We all needed so much food too after that workout!) and to hand out awards. Each person is assigned one of our teammates to make an award for and man, we have some talented people. Biter and Ninja both painted amazing paintings for Bruisie and Batty, respectively. BB made a fake cake for Priss that looked so real that multiple people were asking who brought the cake for dessert. Priss and Batty made awards for Jill and AA that were hilarious. It was seriously an impressive set of awards. I have Pow, our captain and I made her a photo mosaic out of the approximately one bajillion pictures that were taken of her throughout the home team season this past year.

Our coaches were also there. They are three amazing, helpful, and all-together awesome people who make our bout days go smoothly and help us keep our heads on straight. I’m just so impressed and grateful to have been drafted to this team. They have truly made my first year of derby an unforgettable one. Oh yeah, and look what I got!

First off, Vandal, who was my mentor this year (but sadly wasn’t at the party) made me a bedazzled, be-quoted, light saber. It also lights up and makes sound effects. It’s basically as incredible as it sounds. And then for team awards, my team voted me Rookie of the Season! Funny to think just a little over a year ago I was strapping on skates for the first time. A lot can happen in 12 months. I’m excited to see what happens over the next year.

After our team party we all had to hustle home to get ready for the league party that evening. It’s called Deja Bruise and it’s themed. Because nobody runs with a theme more than a derby girl. This year’s theme was the 1970s and there were some tremendous outfits. Because I can’t be bothered to dress up ever (even Halloween), I just showed up in a regular old dress.

I was asked early on if I would bake for Deja Bruise, which I happily accepted. The number started at 60 and slowly crept up to nearly 100. I had planned on making the cake pops for a while, but not enough for 100. So, in between the two parties I decorated a cake.

I decorated it in about 40 minutes which has to be some kind of record for me. The cake pops I made were also roller derby themed. They were color coordinated for each team and decorated to look like jammer panties and pivot panties. The cake inside was also colored. The DC DemonCats had red cake, the Cherry Blossom Bombshells had pink cake, Scare Force One had blue cake, and the Majority Whips had green cake.

Andrew made the cake pops stands which were glittery and wonderful and worked perfectly.

It was a superb evening. Also, ever wanted to see what I would look like with a giant, curly afro? Here’s your opportunity!

Slam (in green) let me borrow her wig for a little while and I must say, it was quite a novel experience for me. I’ve never had hair with so much volume or bounce. Also, Sugar got in one spectacular photo bomb.

Phew, it was a crazy fun day. I love my team, I love my league, I love derby. Also, it’s good a thing there’s another day in this weekend.