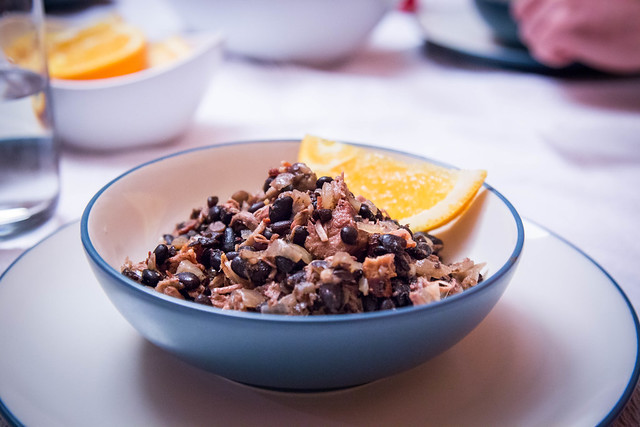 For the first time in a long while, I cooked Sunday Night Dinner! I had two meetings today and was going to be in and out so I decided to make something in the slow cooker. I was perusing the internet for recipes and stumbled upon this one for Brazilian Feijoada. It mostly piqued my interest because Andrew has been talking about making black beans and using an orange for flavoring for a while and this recipe has both of those things. It also has a ham hock. (I wasn’t really sure what a ham hock was before I made this, and I’m still not really sure.)

It was a little more work than just tossing everything into the pot and forgetting about it, but the bit of effort was worth it. Browning everything in bacon grease probably had something to do with it. Also, after letting everything cook for eight hours, the meat literally fell off the bones and the flavors were rich and deep. The orange slices were unexpectedly refreshing and added a great contrast to the smokey flavor.