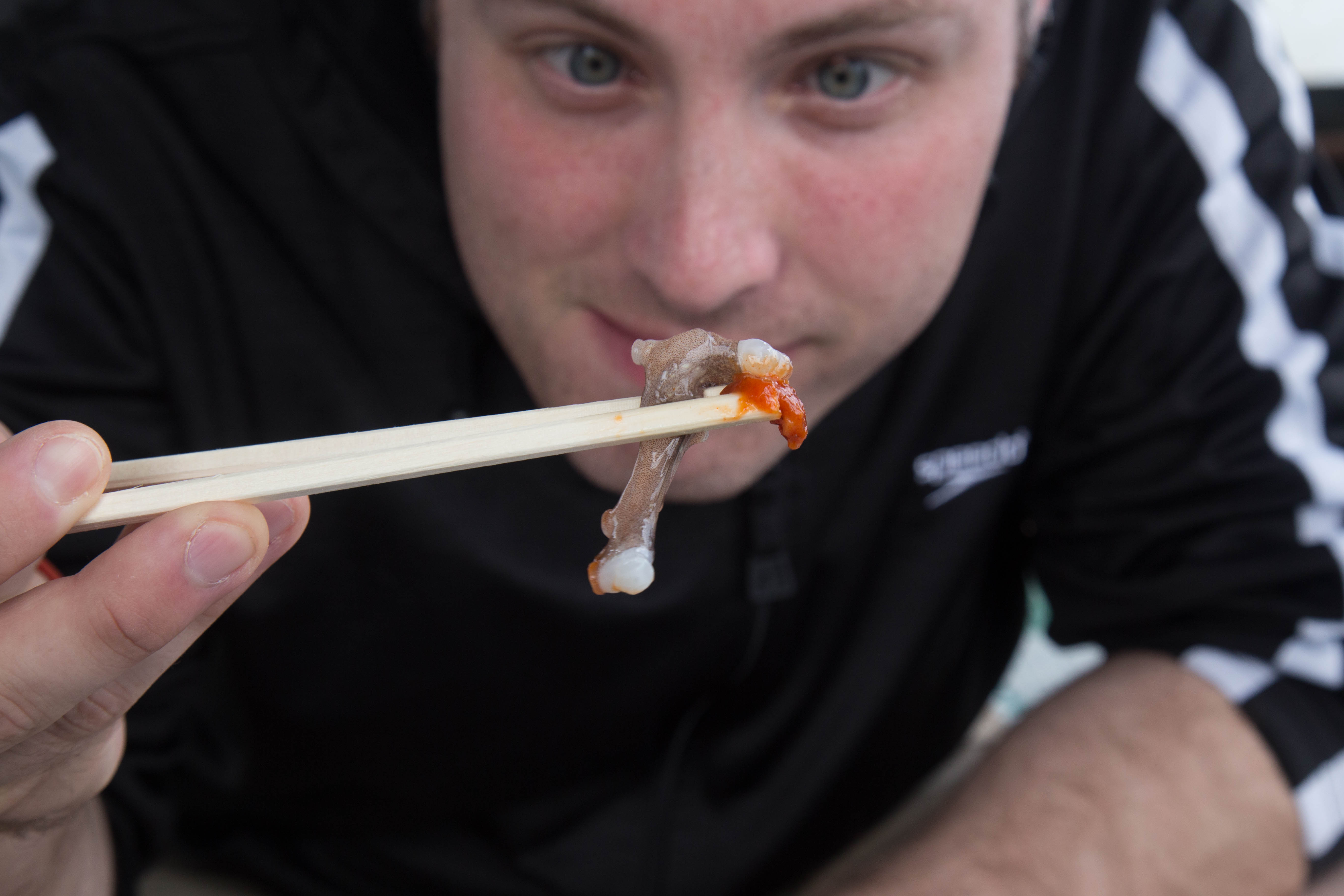 We only spent one full day in Busan and we made the most of our day there. We got up early in the morning, hopped on the subway and then took another harrowing bus ride (seriously, bus drivers in Busan are nuts), to the Beomeosa Temple.

When we got to the temple, we figured we would just look around for a while, take some pictures and be on our merry way. However, as we were standing there looking at the first gate, a random guy came up to us and started asking where we were from. After telling him we were from DC and exchanging a little smalltalk, he offered to give us a tour of the temple. It turns out he was a retired English teacher who now spends his days giving tours (that’s him in the bottom right corner).

It turned out to be really nice having a tour guide. He was able to explain what the buildings were for and some of the symbolism of things around the temple. Along the way on our tour we also picked up a French couple and three Spanish girls, so by the end there was a whole group of us. Our guide also hooked us up with a free lunch. We’re still not entirely sure how this happened, but before we knew it, our whole group was down in a cafeteria being served vegetarian bibimpbap by people from the temple.

On our way back to the city, we walked by a lady making these cookies fresh. The smell was too good to pass up so we got an order of them.

They had sort of a cakey exterior and were filled with hot (so hot!) custard inside. So delicious.

After lunch we decided to make our way down to the southern part of Busan to Taejongdae. Taejondae is basically a big park with a path along the water with various attractions every so often.

Because I hadn’t yet eaten enough, I decided I wanted to try some of this corn we kept seeing everywhere. When you see it around, it just looks like an ear of corn wrapped in a plastic bag. Korean corn is sweet, almost like candy corn, but has a waxy exterior. It’s pretty easy to eat and doesn’t get stuck in your teeth, but the waxy, glutinous texture was not for me.

It was a great day for a walk near the water. The breeze was cool and kept us reasonably comfortable. Apparently on clear days you can look across the water and see Japan, but it was a little cloudy so we weren’t able to see it.

It seems that in the past the beautiful cliffs have been a popular sight for suicides because there were numerous references to suicide including this statue which is of a mother and her children which is meant to remind people who are about to jump off the cliffs of their mother’s unconditional love for them.

The highlight was finally reaching the lighthouse at the point of Taejongdae.

We spent some time enjoying the view before venturing down to the rocks below.

Right by the water there are a number of old Korean women dressed for the weather with large buckets filled with live fish. You walk down there, peruse the buckets, choose your fish, and the women will prepare it for you to eat right on the spot.

Despite some communication issues, Andrew and I managed to get an order in and take a quick load off of our feet after all the walking we’ve been doing. A while ago we had seen an episode of Anthony Bourdain’s show where he went to Korea and tried fresh octopus and since then I knew if we ever went to Korea, we were going to have to try that.

Well, sitting in a tent by the ocean seemed as good a time as any to give it a try, so that’s what we did.

Eating octopus so fresh that it was alive 5 minutes before you eat it, is an experience. Even though the octopus is all cut up into bite sized pieces, the pieces still move around for a good long while. So when you get a plate of octopus, it looks something like this (click image for video):

To be perfectly honest, it didn’t really taste like anything. It’s chewy the was calamari is chewy and mostly tastes like whatever you dip it in. You did have to be quick about dipping, because if you lingered too long, the suction cups would stick to the dish. When you put it in your mouth, you had to chew quickly or else it would stick to the sides of your mouth. Quite and experience!

After our octopus snack we got back on the trail, hopped on the bus and made our way back to Busan city. I had read that we should check out the Jagalchi Fish Market so that was our next stop.

It is enormous. There are dozens and dozens of vendors with every fish imaginable lining both sides of the street. It was to just walk through and gawk at everything. I can’t say I’m super schooled in squid size or anything, but it seemed like all of the fish at the market were super-sized. If we had just not downed so much octopus, I’m sure we would have eaten dinner there.

After our trip through the fish market we walked across the street to an area that was known for having lots of places to eat and lots of street vendors. We took a loop around the area to scope out what was there. What was there, were a lot of fortune tellers. So many.

There were too many options and we were indecisive, so we decided to have some dumplings as an appetizer.

We followed that up with some spicy noodles.

And because we couldn’t help ourselves, topped it off with another donut.

By then we were full and tired so decided to call it a night and head back to our apartment. When we got back, it was dark and the bridge outside our window was all lit up. Our last day in Busan was such a busy and unexpected day, just as it should be.