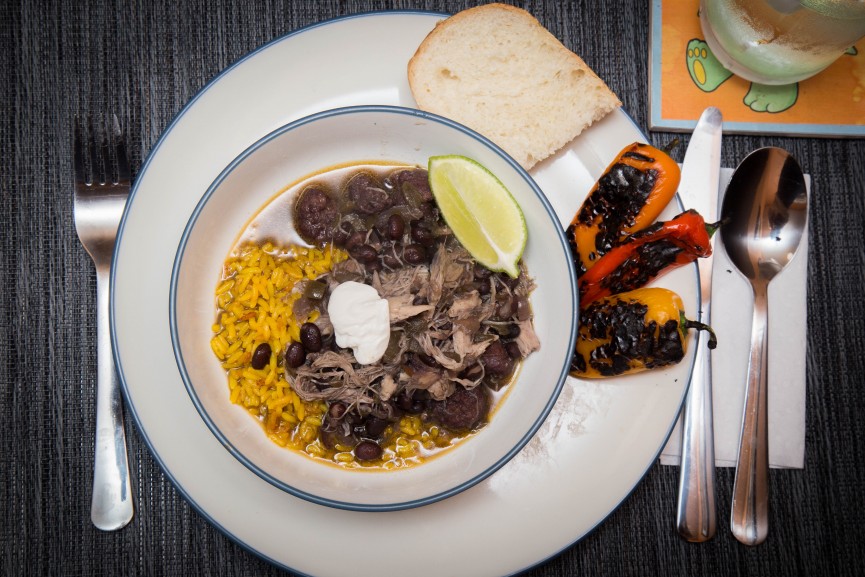 But he finally picked one out! So we now have a shiny new, albeit, somewhat dangerous appliance to play with and tonight we took it for its inaugural run.

I didn’t know what to make for dinner, so I literally googled, “pressure cooker recipes” and stumbled upon this one. It looks a lot like another dinner I made a while ago, but this one took far less time and was a total hit.

Pressure cookers are magic. Actually, that’s not true. I took an entire course in college that explains why that’s not true, but being able to go from dried beans to a cooked beans in 35 minutes is pretty rad. This whole meal took less than an hour to make with the pressure cooker, as opposed to the hours it would have taken had we had to rehydrate those beans.

The aroma as we let the steam out of the cooker was awesome. It was full of flavor with a nice hint of spice from the green chilies that didn’t overwhelm the dish. We served it over rice with some lime juice garnish, avocado and tomato salad, and roasted peppers on the side. Yum.

For dessert I made an apple crostata. I had a few leftover apples and a hankering to bake something but didn’t want to spend the five hours it takes to make a proper pie. A crostata is basically the Italian version of a galette. A galette is a French pastry that is basically a deconstructed pie. The rustic appearance is both appealing and easy to make. People went back for seconds, so I’m counting this as a win too!