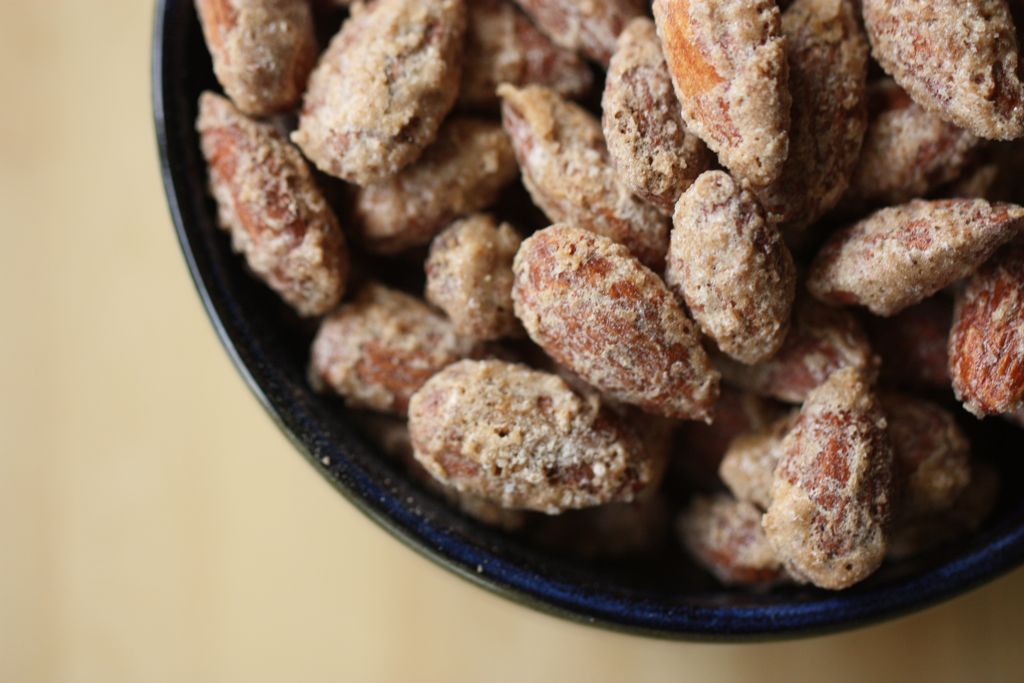 I’ve been on an almond roasting binge lately. It’s so easy and the results are spectacular. This past weekend Betsy and I hosted our Second Annual Hanukkah Party (yes, I know Hanukkah ended already, but it was a mutually convenient time) and while the party featured doughnuts, sweet potato latkes, regular potato latkes, and zucchini latkes, the almonds got the most comments.

I must admit, the inspiration for these almonds originated with a visit to the Renaissance Fair this year. While some people (cough::Andrew:cough) may have been disappointed we did not go all out and dress up, there was plenty of fun, lots of weapon throwing, an offensive comment or two (by the throwing star guy), and tons of food.

I ate…cinnamon roasted almonds, deep fried pickles, beef stew in a bread bowl, soda, chicken on a stick, a sno-cone, and possibly three or four other things that I have chosen not to share with you in order to maintain some semblance of dignity (or did that go three foods ago?).

But, what I’m really trying to say, is that I can’t stop eating almonds like these. I bought some from a stand on the side of the road on the way to Harpers Ferry and 3/4 of the bag was gone by the time I got home. My almond habit was starting to get expensive, so I decided to figure out how to make my own. And much like my other fair food obsession (kettle corn), turns out these are SUPER easy to make.

So, if you have an hour or two (they aren’t hard to make, but do take a little bit of time), whip up a batch (or two or three).

In a medium sized bowl, beat the egg white until foamy. Add the water. Stir in the almonds until wet. Finally, add the sugar, salt, and cinnamon and mix until the almonds are well coated.

Roast the almonds in the oven for 1 hour 30 minutes, stirring them every 20 minutes, until golden.