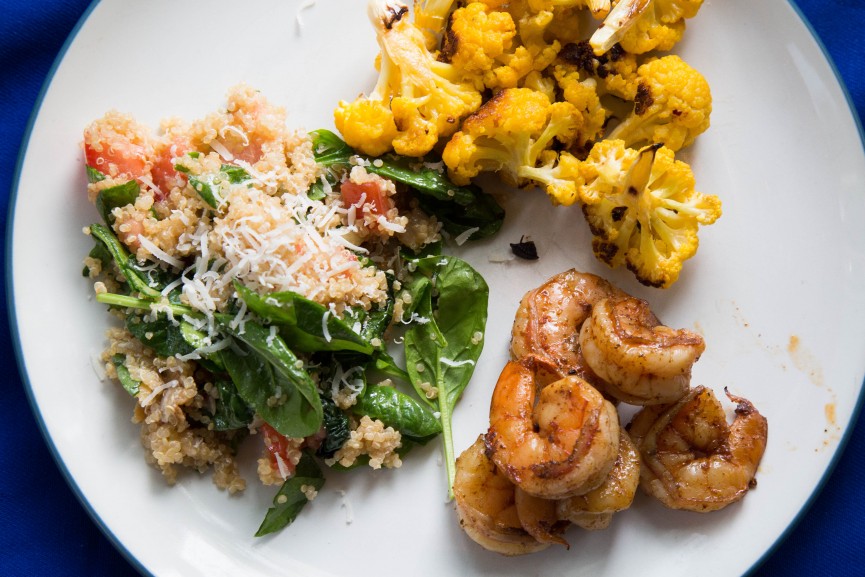 After a few weeks off, we resumed our Sunday Night Dinners with the Passover edition. Passover started last Friday night, so for a good week or so, Andrew and I are off leavened food. ‘Tis really a shame since I have a well-documented love of bread.

Turns out, making a kosher for Passover meal isn’t too hard, you just have to get a little creative. One might say this actually isn’t that creative, but it’s a little out of the realm of my usual cooking.

Quinoa is unexpectedly kosher for Passover which means it’s a perfect stand-in for pasta or rice (although, apparently rice is kosher for Passover now). I’m usually kind of neutral on quinoa, because I’m not a huge fan of the sort of crunchy texture of it. Well, this recipe somehow gets rid of that, and instead you are left with a flavorful, rice-like, quinoa salad.

I’d never actually roasted cauliflower before, but it seems like it’s all the rage lately and I wanted to find out what the big deal was. It was super easy and not all the different from roasting other vegetables, but I have to admit, roasting cauliflower changes the texture of it from a dry, crumbling vegetable into something beautifully savory and delicious to eat.

I think the general consensus was that dinner was a hit. Passover or otherwise.

Although, I’m not sure Owen agreed…